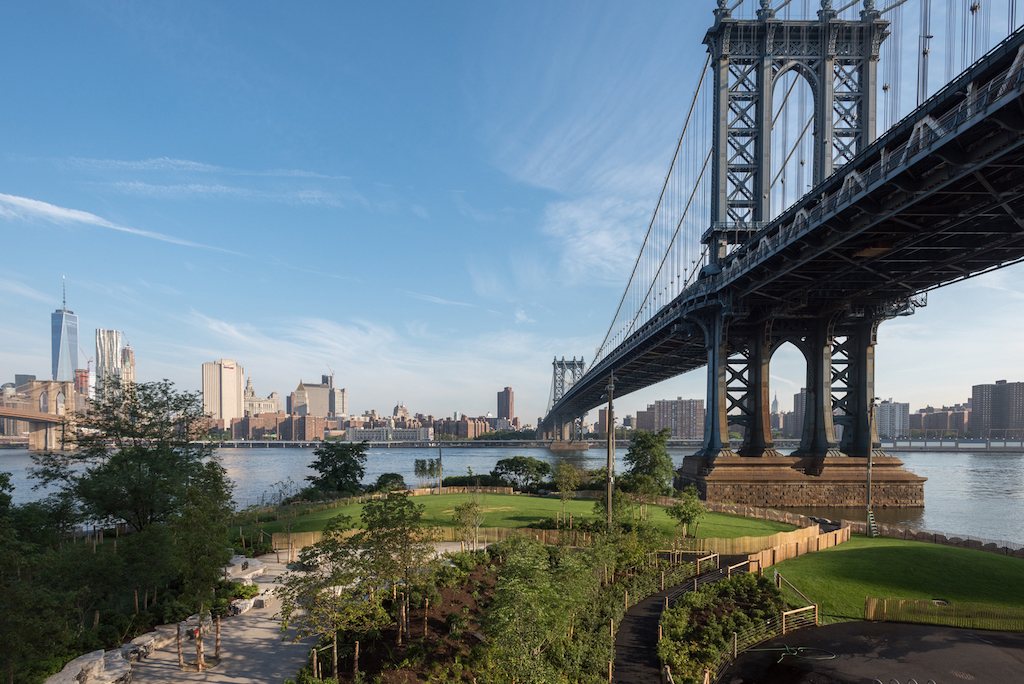 Following on from the exciting announcement that New York will host next year’s SITE Global Conference (we’re so there!), we hotfooted it to an NYC & Company press event in London to get an update on all the latest news from the Big Apple.

New York has always been a popular destination for meetings and incentives, and with so many new developments across all five boroughs, there has never been a better time to choose NYC for your next event. We round up some of the highlights of what’s new in the city…

Park Lane New York opened on Billionaires’ Row in December, following a complete transformation. Rising 47 stories into the New York skyline and situated steps away from Central Park, the property features 610 rooms – nearly half of which provide sweeping park-facing views with the remaining rooms featuring views of the Manhattan skyline along with more than 1,000 sqm of reimagined indoor and outdoor event space, and the recently opened rooftop bar, Darling. 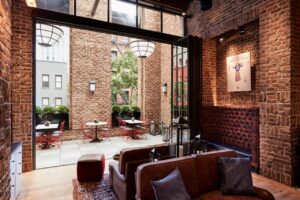 More than 9,000 new hotel rooms are coming online in the city in 2022, including the new CIVILIAN Hotel (right). Designed by renowned architect David Rockwell, the CIVILIAN is new hotel concept by Jason Pomeranc — founder of the SIXTY Collective, the international hospitality company behind SIXTY Hotels.

Located in Hell’s Kitchen on the edge of the Theatre District, this hot new property features a restaurant, a secret garden accessed only from a concealed entry point, a plush guest lounge, a library with a bespoke collection, and a rooftop bar with striking views. Many of New York’s brightest talents collaborated on the 203 rooms, adding distinctly local touches and authentic accents. In addition to responsible construction and best practices in sustainable sourcing, the hotel partners with charitable organisations like American Theatre Wing. 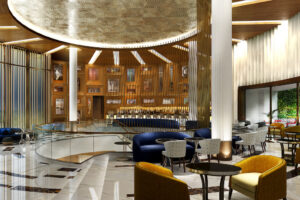 Facilities at the 44-room property include the two-floor entertainment space The Venue on Music Row, upscale restaurant upscale NYY Steak in partnership with the New York Yankees, all-day-dining Sessions Restaurant and Bar, the 34th floor RT60 bar and lounge.

Another eagerly awaited property, Aman New York is finally expected to open its doors in 2022. Designed by Jean-Michel Gathy, this urban sanctuary is in the iconic Crown building – formerly the first home of Museum of Modern Art – at the prestigious address of Fifth Avenue and 57th Street. The 83-room property will boast a dramatic double-height Sky Lobby, 10th-floor wraparound Garden Terrace, which will feature a bar with sweeping views of Central Park, a Cigar Bar, and year-round dining, private members club, three-floor Aman Spa, Jazz Club and Wine Room. 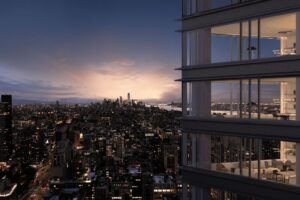 This summer will see the opening of the Ritz-Carlton New York, NoMad (right), offering 250 rooms and suites alongside legendary restaurants and bars by Michelin-starred Andrés chef José Andrés. These include Zaytinya, offering an innovative mezze menu inspired by Turkish, Greek and Lebanese cuisines served up in a sleek and modern setting by Rockwell Group, and a new iteration of the high-end avant-garde dining destination, the Bazaar, to come later in 2022.

The hotel will also offer the signature Ritz-Carlton Spa and Fitness Centre including eight treatment rooms, sauna & steam rooms, and indoor and outdoor event space including two Ballrooms with the largest accommodating up to 283 guests, and an outdoor open-air terrace with Empire State Building Views and capacity for up to 150 guests. 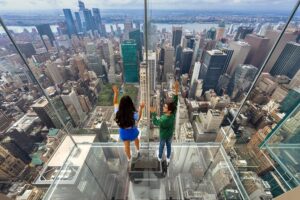 There are also many new experiences and entertainment options for groups across the city. For a birds-eye view of the NYC skyline, head to SUMMIT One Vanderbilt (right), an immersive experience and observatory located in the crown of One Vanderbilt, the skyline-defining new tower in the heart of Manhattan.

The Summit includes an all-glass enclosed elevator called Ascent which travels up the outside of the building to breath taking views that soar at 1,210 feet above New York City. There’s also an outdoor bar, seating areas to enjoy the magnificent views, the highest urban outdoor alpine meadow in the world, and fully transparent glass sky boxes called Levitation that jut out of the building and suspend daring guests 1,063 feet above Madison Avenue. 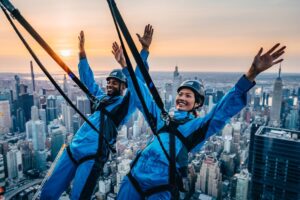 Groups with a head for heights should also check out City Climb at EDGE At Hudsons Yard (right). The highest external building climb in the world, this sky-scraping adventure challenges Climbers to scale the outside of a super tall building, then lean out from the outdoor platform at the top of the skyscraper.

Soar to New (York) heights on a spectacular uplifting ride at new immersive attraction Rise NY. The 46-seat flight simulation ride is the first of its kind in Manhattan. Visitors are lifted 30 feet into the air and take in the splendour of NYC while suspended inside a 180-degree, 40-foot projection dome featuring 8K aerial footage that creates the sensation of flight. 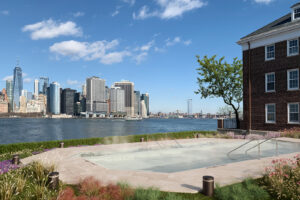 For those that would rather keep their feet firmly on the ground, QC NY (right), a new destination spa resort by QC Terme Spas and Resorts, recently opened to much anticipation on the northern tip of Governor’s Island, New York. Spread across three readapted buildings, the New York opening mark’s the spa and wellness brand’s debut in North America, bringing its signature European wellbeing rituals just a ferry trip away from lower Manhattan.

2022 marks the 30th anniversary of NYC Restaurant Week, a four-week programme kicking off in July and taking place at a variety of restaurants from neighbourhood eateries to high-end dining across all five boroughs. There are also a host of new restaurants opening across NYC this year, as well as multiple new shows opening on Broadway. This fall, visitors will be able to stop by the new Tiffany & Co. flagship store at 727 Fifth Avenue in Midtown Manhattan. The store will include eye-catching installations, exclusive products and the reopening of The Blue Box Café, where customers can enjoy breakfast.

NYC will also welcome several new museums in 2022 and beyond, including the Museum of Broadway this summer, an interactive and experiential museum that celebrates Broadway’s rich history, and the Louis Armstrong Center and American Museum of Natural History Richard Gilder Center later in the year. 2023 will see the opening of The American LGBTQ+ Museum, with a Universal Hip Hop Museum in The Bronx planned for opening in 2024.

NYC & Company has also launched several initiatives aimed at encouraging visitors to the city to explore all five boroughs. As part of a new ‘Get Local NYC’ campaign, the destination marketing company is inviting visitors and meeting and incentive groups to explore NYC like a New Yorker, and get out and see other neighbourhoods like Brooklyn, and The Bronx.

Globally, New York City is known as one of the most culturally rich and diverse cities and is the home for many international citizens. Throughout the five boroughs, visitors can explore and taste the different cultures that exist within the city. NYC & Company has unveiled a series content hubs celebrating some of these cultures. These include The Black Experience in NYC, The Latino Experience in NYC and The Asian Experience in NYC.