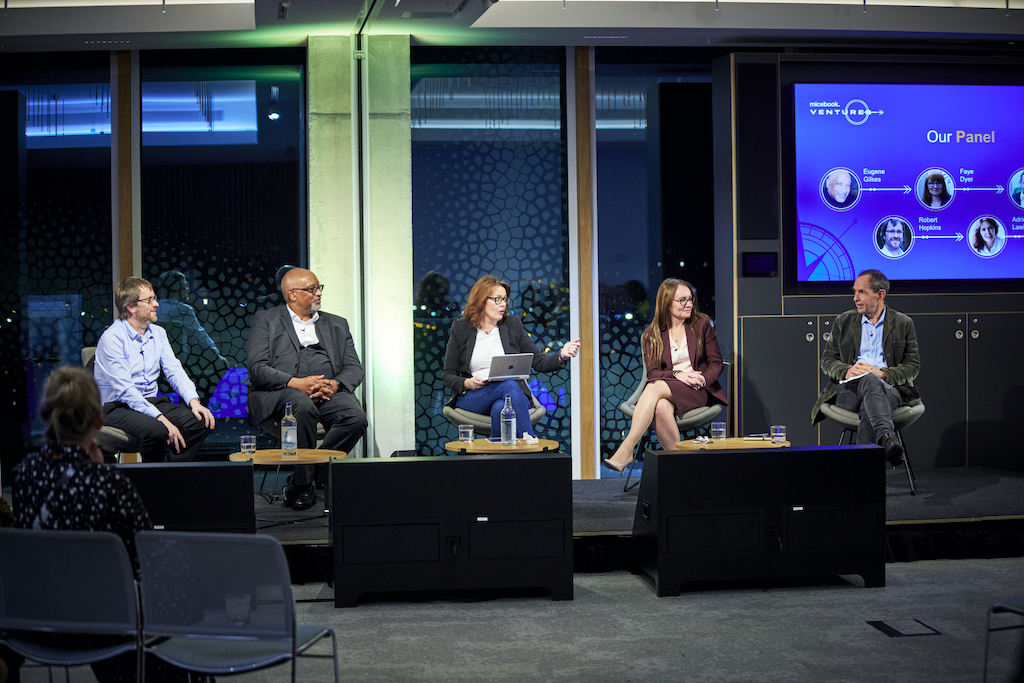 Event profs attending the first micebook Ventures in Liverpool last week were inspired and challenged to rebuild better and faster, at a Cambridge-style opening debate featuring experts from outside our industry.

Ventures creator Chris McQue kicked off the proceedings with a hard-hitting introduction about the existential crisis humanity is facing, with greenhouse gas emissions having doubled since the 1970s.

“It’s clear to me that business as usual is no longer an option. We need to seize the moment, accept responsibility, and change some deeply engrained habits. We have got to ask ourselves three very big questions. The first is ‘How can we do any sort of business at all on a planet that is dying?’ Secondly, and even more challenging, ‘Is the world a better place because of my company’s presence within it?’ And lastly, ‘How can this ever-powerful, ever-dynamic, and ever-energetic sector move at the pace and scale that will transform everything we do as a force for good?’

The audience – a mix of senior event agency buyers and MDs and representatives from venues, destinations, hotels and DMCs – were then asked to vote on the statement: ‘This house believes that without Rebuilding Better at pace & scale, the live business events professional is a dinosaur, facing extinction by 2030’.

At the start of the debate, more than two-thirds (77%) of the audience agreed with the statement.

Berners-Lee pointed out that it’s not just a climate emergency that we are facing. “If we want to deal with climate, we need to see it as one symptom of something much bigger that is going on for humanity just now. We’re in the Anthropocene, an era in which it’s humans that are the big thing affecting the ecosystem and have suddenly become such a powerful species on what has now become such a fragile planet compared to our power over it.

He continued: “It is very easy to lose of track of what a critical moment right now is. We are not getting the perspective we need to be getting. It should be front and centre of everything all the time but it’s not, so we must remind ourselves that this is the moment we are in. It’s pretty clearcut that in a very short space of time, either humanity is going to go through a systemic change which is going to have enormous implications for how we live, not least what it means to be in business, and what it means to be in this industry. Or we are going to carry on with the business-as-usual scenario and we are going to head to a very dark place.”

Joey Ankrah, musician and member of Liverpool band The Christians, kicked off the questions by referring to economist Adam Smith’s 1776 statement that self-interested competition was good for the whole, and asking whether this statement now needs revising and in what ways should we revise our self-interested actions.

ACC Liverpool’s Dyer said: “If we think about the big challenges that we are now facing, it can’t be a case of go alone and go fast anymore. It’s got to be go together and go far. It’s not just about making money. We need to recreate what success looks like and we need to work together in the ecosystem to find the best sustainable solutions. Is self-interested competition good for the whole of society today? Absolutely not because it’s very narrow in its definition of what good looks like.”

Ankrah went on to talk about “digging deep” to find your personal values and what’s important to you, while Hopkins argued that “we need to forget thinking about self interest in terms of finance and think about it in terms of social sustainability and communities and people.”

Gilkes agreed but warned we should not impose our beliefs or values on others. “One of the great challenges we all have is trying to impose the values we have from our backgrounds and understanding on people who are not quite there yet. It should be about inspiring people to think differently and then enabling them, and then going to that next step in making it possible for them to believe in the values you are talking about. We are often too ready to say this is what we think you should do, but we need to step back and do the inspiration bit first.”

To fly or not to fly

The audience were then asked the question ‘Is a reduction in personal and professional air travel imperative to tackle the climate emergency’, with the majority (80%) of respondents answering yes.

Berners-Lee said: “I think flying is the toughest nut in the whole of this climate issue to crack. We don’t know how to put a long-haul plane in the sky without burning through 100 tonnes of carbon and we don’t have the technology anywhere near to do anything about it. There is no such thing as sustainable aviation fuel. We must bite the bullet, and that doesn’t necessarily mean no flying, but it just means to say there’s a hard reality and we just have to do less of it and do it for better reasons.”

In response to a question from Open Audience’s Leslie Robertson about what some of practical steps are that the event industry can take to reduce our impact, Berners-Lee explained that flying economy is better as it has about half the footprint of first class. “Video and hybrid conferencing also has a big role to play. There are technologies that are still emerging to help with that. I think the hybrid technology is going to improve so we can network properly in the way we are doing at this event. But there are no easy answers.”

Robertson added: “In some cases, there may still be a requirement to bring some people together. Many of the conversations we are having now are around the purpose of meeting and some of the decision-makers at the top of organisations are the worse culprits. But what is becoming increasingly common these days is the delegate voice – we are hearing a lot more from the younger generation who are saying ‘I’m not sure I want to jump on a plane’. There are so many technologies out there, fully virtual and hybrid, that just knock your socks off. So, I think we need to challenge organisations to host more virtual events or at least run more conferences regionally instead of globally. It may not be the same holding a virtual or hybrid event, but it’s not bad.”

He said the accessibility and inclusion aspect is also important. “Last year we had delegates from 141 countries, so you had people from Guatemala and Sudan. If it was a physical congress, many of these people are not going to be able to get to the physical event. If inclusion is genuinely important, you’ve got to find some way to engage with them.”

ACC’s Dyer said: “Destination choice should be a key decision maker when it comes to sustainability. You should be looking at where your delegates are coming from, and the travel options, and explore where is the best location for this event. That isn’t the sole decision criteria, but it is a key element that people need to consider. How well is this location connected by train to the rest of the UK, can I get on a ferry or train to another country? We need to be thinking about these things as organisers when looking at locations for events in future.”

Stephan Degueurce-Roberge, managing director Monaco Government Tourist Authority, UK, which was a sponsor for Ventures, asked the panel how we educate event organisers to be more responsible, ethical and sustainable to achieve carbon neutrality?

Hopkins said it’s all about having the right data and information available. “Where we are sat now is a perfect example of that. We’ve got a body of years of research that we put behind the development of this venue. Our starting point was social sustainability and human health and what would create the healthiest building in the world. From that simple question, we focused on the science of how we would achieve that.

“The amount of data we have is incredible and its incumbent on us as the designer to be able to share that information with event organisers. We looked at so many elements such as air filtration, CO2 concentration, circular carpets, and so much more to create this building. As an event organiser, you need to be able to talk intelligently about one space versus another. All that data is something you should be asking venues for when you look at the different options available.”

Gilkes said: “This is not about shutting the whole industry down. The industry has an opportunity to show by example what can be done. It’s not about doing everything all at the same time. For me, it’s about saying what can we do differently?”

The conversation turned to the end-client and their concerns about cost, but Gilkes pointed out that its important understand that your client is still finding their way through this whole journey and that everybody in the supply chain has a role to play. “The earlier you can have the conversation to say, how will do this collectively in the most effective way, that cuts the cost in the longer term. But you have got to be deliberate about it… Sometimes you can be the one who says to the client ‘what about your delegate’, because they are the ones that are also saying we want this to be different.”

In response to a question from the audience about how we keep sustainability on the agenda, amid the economic crisis, rising costs and the war in Ukraine, Gilkes said the conversation needs to be constant. “We need to look at where we are now and be clear about where we want to be, and where the next milestone is. Sustainability and diversity and inclusion have for a long time been considered a nice to have bolt on to organisations. No one would ever dream of not having a robust strategy around sales, health and safety or marketing and communication, and yet we are quite happy to let something like this drop when it starts to get difficult.

“The starting point is why are you doing it? If you are clear about your why, you won’t fail. If it sits at the core of what you do, and you tell people about it, internally and externally, it makes it hard to renege because people can call you out.”

The discussion also covered inequality, the UN Sustainable Development Goals, and the importance of having a comprehensive framework in place and identifying and communicating with people who are not in the room.

At the end of the debate, we again asked the question: ‘This house believes that without Rebuilding Better at pace & scale, the live business events professional is a dinosaur, facing extinction by 2030’ and those in agreement rose from 77% at the start to 85%.

The aim of the discussion, and the event as a whole, was not to solve all the problems of the world but hear from experts from outside our sector and inspire and challenge event profs to think and act differently while demonstrating why industry-wide collaboration is critical to make real and lasting change.

It was a broad and challenging topic to debate, but huge thanks to all our panellists for sharing their insights.