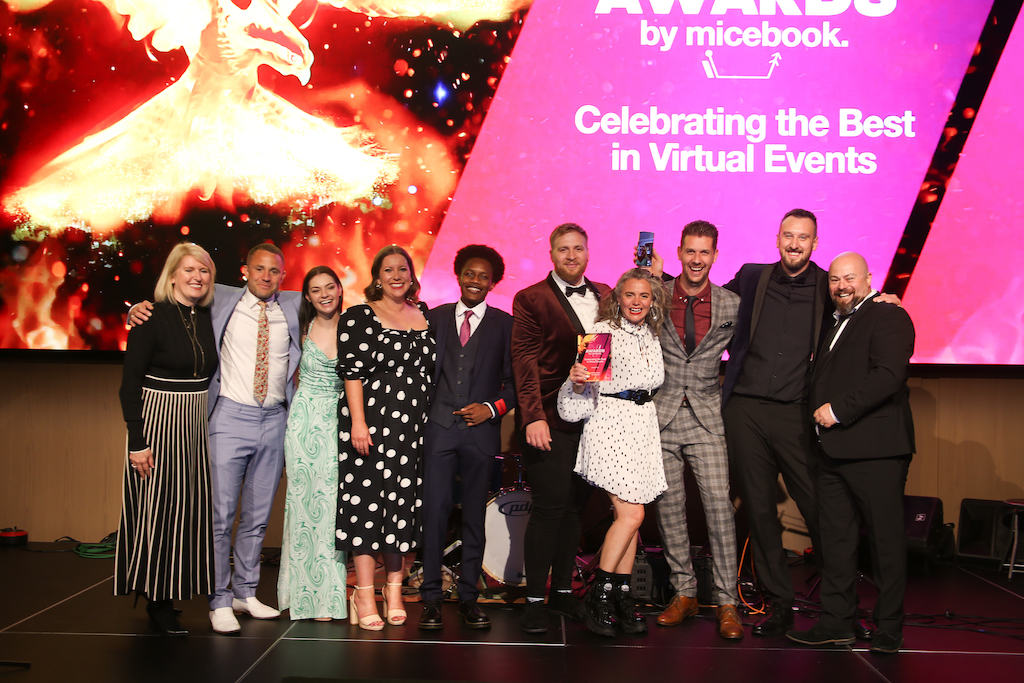 Around 200 event profs gathered at the Pan Pacific London on Friday night to see OrangeDoor, Cheerful Twentyfirst, DRPG, Smyle, EventsAIR, Singapore Tourism Board and many more crowned winners at the micebook V Awards 2022.

OrangeDoor was one of the big winners on the night, picking up the Best Agency (under 40 employees) Award, two commendations, and the Grand Prix. It was also a good night for the Smyle team who won Best Product Launch for their work with Samsung for the second year running, and Best Audience Engagement, while Cheerful Twentyfirst was awarded the Best Agency (more than 40 employees) Award.

We were thrilled to give our first Event Industry Change Maker Award to Gabrielle Austen-Browne in recognition of the work she has done to make the industry more diverse and inclusive. TTA & Shine Cancer Support were awarded Best Use of Small Budget and Sledge took the gong for Best Sustainable Solution.

Best Internal Communications Event was awarded to DRPG for BT Consumer Live, Live Union picked up the award for Best Charity or CSR Event, FIRST won Best Conference for Sibos 2021, and INVNT GROUP walked away with Best Exhibition or Roadshow.

Chetan Shah, micebook CEO and founder said: “It has been another incredibly hard year for the sector and in many ways harder than the year before. The winners of the V Awards 22 have demonstrated great creativity, resilience and leadership to navigate current and new challenges to once again come out stronger.

“We were honoured to have such a high calibre of judges giving credibility to the process and huge congratulations to all the winners and those that were highly commended as they would have deserved the accolades. The business events sector can be a force for good and this was demonstrated on the night.”

We were thrilled to support industry charity Meeting Needs, which raised £1,500 on the night through a raffle with Pan Pacific London, Sé Boutique Hotel and Tower Suites by Blue Orchid generously donating prizes.

Thanks to stand-up comedian Daliso Chaponda and conferenceemcees.com founder Samme Allen, who expertly co-hosted the awards.

Thanks also to our partners including Pan Pacific, CrowdComms, Conference Emcees, Maverick Event Show Crew, Event Decision and Speakers Corner for helping to make the event a huge success, and our sponsors Destination Canada and Business Events Australia.

Check out our Winners Book below