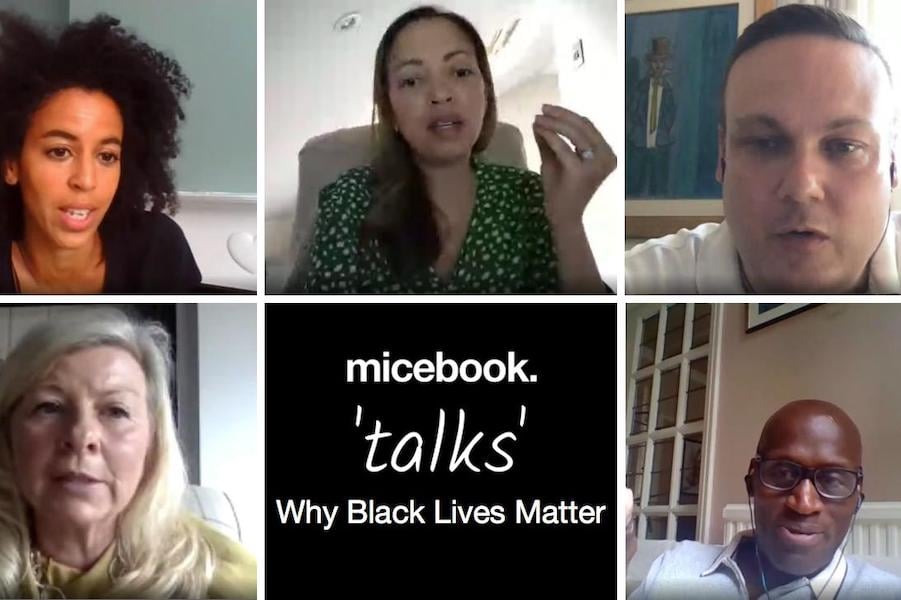 Following the tragic death of George Floyd and the Black Lives Matter global protests, we hosted a discussion last week on why diversity and inclusion are important and why there are so few BAME faces at a senior level in the events industry.

The session covered a range of topics from the terminology being used to why it makes good business sense to have diversity, especially in these troubled times, and what can we do to bring more equality to the events sector.

Our event came in the same week that Ashanti Bentil-Dhue and Gabrielle Austen Browne launched Diversity Ally – a consultancy and membership organisation aimed at improving diversity in the events industry.

It was clear from the discussion that diversity is a big issue in the events sector. “I’ve been in this industry for coming up for 20 years now and if I’m honest, I can probably count on two hands the number of colleagues I have had the opportunity to work with who sit within the BAME community, and I can probably count on one hand the number of people that I have directly had the opportunity to interview from that community,” said Black Tomato Agency Co-head Jessica Charles.

Realistically we only scratched the surface, but it was a good start and thanks go to our excellent panel members:

Watch the full recording through our Voice forum here, and check out our top takeaways below…

Francescone: “Racism exists, so let’s get that on the table. It’s an issue that just isn’t going away. There is racism so I think we need to be 100% clear about. Then there are structural issues in terms of economic background, access to education, that of course make it so much harder for people from disadvantaged backgrounds to climb the social ladder.”

Sharpe: “I worked with IMEX on a global survey and we had 650 responses and the percentage of BAME respondents was less than 9%, out of which 3.49% was classified as black. That’s really low so I think we need to address why the pipeline is so low of potential BAME employees coming into events. If you have a small pipeline in the first place, then it’s very unlikely those people are going to get to the top.”

Charles said there are generally two routes into the academic industry – the academic route through universities that offer event management degrees, and luck, in other words having the right opportunities presented to you and nothing standing in your way.

“A lot of the people who work at Black Tomato come through recommendations or circles of friends. Whilst that’s great, it really does cut off anyone who is not within that circle of friends. As a business, we only have a 4% representation of black people at Black Tomato. So given the remainder are white and those circles of friends are typically white, where are the opportunities for people who sit outside of that?”

We need to widen the recruitment pool and create role models

The panel all agreed that as an industry we need to work harder to widen the recruitment pool to attract more people from within the BAME community into events. Charles said: “We are look at how we are recruiting. We think that we probably recruit fairly but we are not actively recruiting to attract the sort of talent that we would like to see which would bring diversity within our business.”

Mason said: “It’s not about positive discrimination and putting people into jobs who are not right for them. It’s about looking in different places to find people.”

Having positive role models such as better BAME representation at senior level, and within industry associations, would also help improve diversity within the industry. For example, Sharpe realised that she only had a small percentage of BAME women applying for her Fast Forward 15 mentorship scheme for women in events.

“I realised that the reason I probably wasn’t attracting many women from the BAME community was because most of my mentors were white and I needed to change that. So next year I am looking at a more diverse mentor cohort. I went back to three of my previous mentees and I asked if they would be ambassadors but also help me come up with a meaningful way to engage the black events community.

“Those three women will be trained by me to me mentors next year. By putting that role model position in place, hopefully I am saying to the community that everyone is welcome and I hope that is effective and shows that I want to get as diverse a group as possible.

Frances Green shared some research from McKinsey & Company which revealed why having a diverse workforce can actually increase your competitive advantage. The research identified three broad three broad categories of approaches – Diversity winners and fast movers, Moderate movers and resting on laurels and Laggards. According to McKinsey, in the case of ethnic and cultural diversity, in 2019, top-quartile companies outperformed those in the fourth one by 36 percent in profitability, slightly up from 33 percent in 2017 and 35 percent in 2014.

“We’re not just saying diversity is important because its PC. You are more likely to outperform your competitors when you have a diverse workforce, so it’s good for business and good for your bottom line,” said Green. “If your workforce is predominantly white and male, that’s only one set of ideas you are tapping into. In times like these, you have to diversify your business and you need a diverse workforce to do that.”

Check out these links for more from McKinsey:
Diversity Still Matters
Diversity Wins: Why Inclusion Matters

Orson Francescone said diversity and inclusion is about data, transparency and governance. “We have our HR system where everyone has to declare their racial background and sexual preferences. It’s not compulsory but we’re making a massive push to get people to complete those fields. The more you collect data, the more you can know where you’re at. Then if you have data, you can set yourself goals. The FT set themselves a goal of having 22% BAME employees and we are at 18%. The second pillar is about building an inclusive culture, which spans things like inclusive leadership training to setting up employee networks, so we have really strong LBGT, BAME community, and mental health networks.

“The third pillar is inclusive people, practices and processes and this is all about recruitment and talent acquisition. We have a 50/50 gender target on all candidates and a 25% BAME shortlist target. All of our candidate pools have to match those numbers. Targets are the only way you are going to make progress on this. Flexible working is another big thing – again creating that inclusive environment where you can get people from disadvantaged backgrounds who can’t necessarily come into London five days a week.”

Charles added that it’s okay to admit that you are only just starting to do something about diversity now. “It’s about moving forward and starting to make that change.”

The panel called for some kind of industry-wide survey on diversity, run by industry magazines such as C&IT and M&IT, would be a good starting point for improving diversity within the industry.

London & Partners’ Donna Abberley made the point that one thing all event businesses can do is look at their supply chains and engage with BAME-owned businesses. “Education, recruitment and mentoring are all good, but these things take time. Our supply chain and procurement processes are things we can look at right now and have an immediate impact on black-owned or ethnic minority-owned businesses.”

Green said she would immediately put that into effect in her agency and request a diverse list of preferred suppliers from the venues she books in future.

Stand up to racism when you encounter it

Belmond’s Mason said: “Racism always will exist in my opinion. But we need to have structural reform at senior levels, in education, for CEOs, politicians, executive producers, whatever the industry is, and they have to drive that change. Then there also has to be education about changing people’s attitudes. If you hear people say things that are wrong, don’t be silent, call them out and tell them that it’s wrong and they can’t say that.”