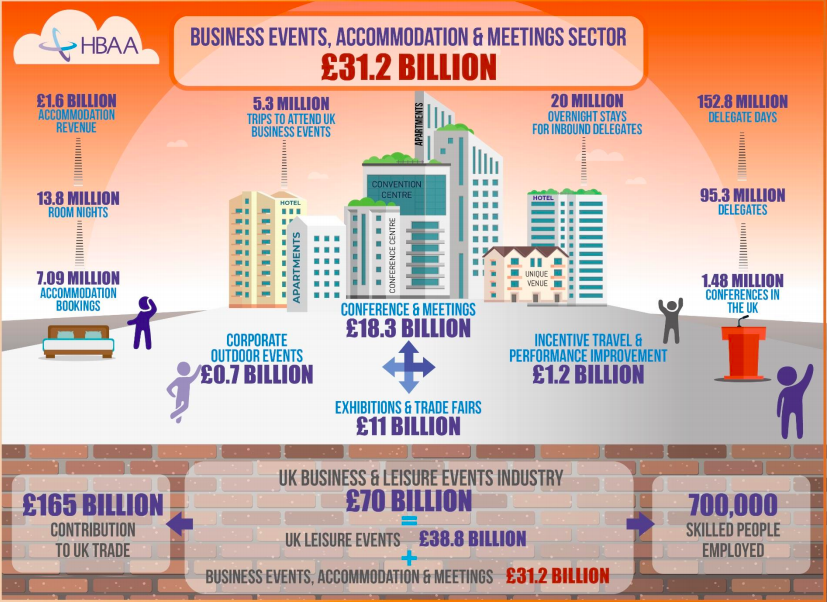 Over 30 per cent of employees working in business events, accommodation and meetings agencies are at risk of redundancy from this month (July 2020) according to a report published by the HBAA (Hotel Booking Agents Association).

The association, which is demanding additional financial support, said that a lack of a clear independent identity has left the industry fighting for its life after being ignored and unappreciated by government.

Lex Butler, Chair of the HBAA said: “It’s been clear since March that the business events, accommodation and meetings sector would be decimated by the consequences of lockdown and would be one of last to re-open, potentially not fully until Q2 2021. It was also clear that special ongoing financial government support was essential and needed immediately.

“HBAA and other industry associations working with Business Visits and Events Partnership (BVEP) have lobbied government energetically throughout this period and have supported their members in asking for this support. But it has been made much more difficult because we have all been having to supply and generate our own data to support our case for financial support as the government doesn’t recognise the sector as an entity in its records, only as part of hospitality, tourism or ‘other’.

“It was a telling fact that there was no specific mention of the industry when the Prime Minister revealed the reduction in social distancing and re-opening of pubs, hotels and restaurants. What about us?”

HBAA’s “Business Events, Accommodation and Meetings – the need for special financial support and a clear identity” report was published to coincide with a debate in the House of Commons on “Government to offer economic assistance to the events industry during COVID-19” following a petition signed by more than 150,000 people.

The report has been sent to the Department for Business Energy & Industrial Strategy (BEIS), Department for Digital, Culture, Media and Sport (DCMS) and MPs to push for support and action after the debate.

Among the key recommendations are the need for the business events, accommodation and meetings sector to have its own Standard Industrial Classification code and consistent representation.

Co-operating with many associations and organisations including the Business Travel Association (BTA), Alliance of Independent Events Agencies (AIEA) and Advantage Travel Partnership, an HBAA survey found that 81 per cent of the 102 companies who responded anticipated making redundancies, and that 30.6 per cent of the workforce are likely to be made redundant in the next three months.

The report also highlights research by DCMS and You Gov (DCMS Business Survey’ published 10 June) which showed that 77.6 per cent of 357 events and exhibition companies surveyed in May had no revenue after March and 61.0 per cent had furloughed at least 75 per cent of staff.

Butler added: “Most immediately the sector needs extra financial support  – a special extension of the furlough scheme, continuing business rates relief, commercial rent relief, a delay in payment of Corporation Tax and a reduction in VAT on accommodation and meetings packages  – until at least Spring 2021 to keep businesses alive and save more jobs. Jobs have already been lost and our industry is on brink of further decimation.

“For the future, the business events and accommodation and meetings sector needs its own Standard Industrial Classification code to give it an identity of its own in government data.”

HBAA is the trade association for the agency, apartment and venue community, with more than 300-member organisations including over 95 agency and 225 venue members.