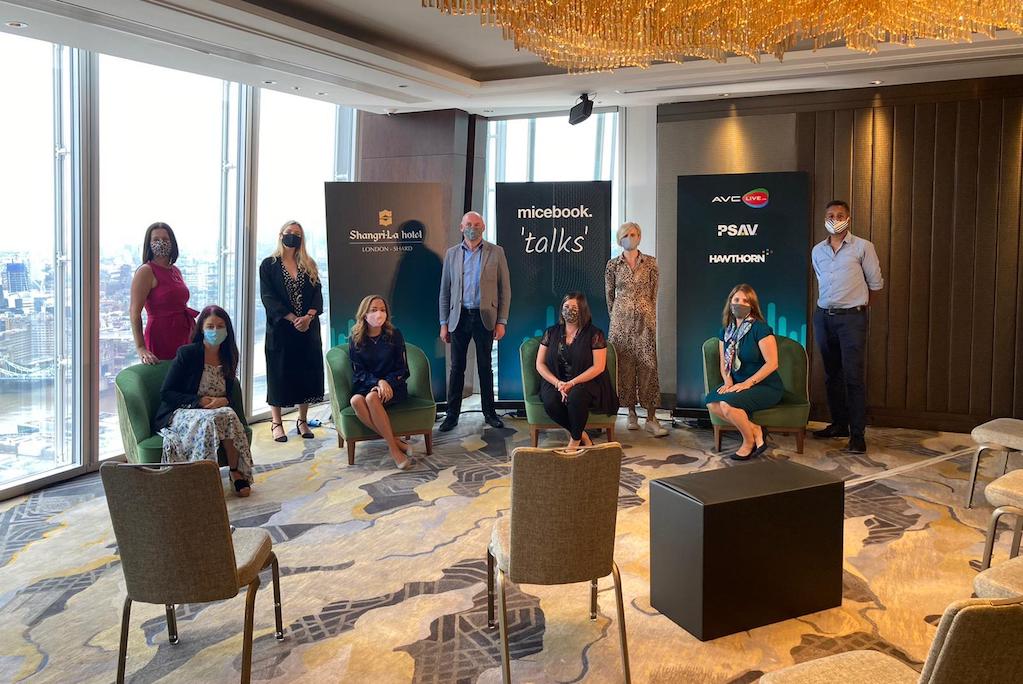 UK event agency leaders called for more clarity, guidance and support from the government at our micebook talks event last week during a panel discussion that took place directly after Boris Johnson’s speech announcing the new ‘Rule of Six’.

In a live broadcast from Shangri-La at The Shard, London, to an audience of 200 event profs virtually, micebook founder Chetan Shah discussed the implications that the new restrictions on gatherings could potentially have on events with Lemon Lane Director Lucy Francis, Green & Pleasant Managing Director Frances Green and Venue Seekers Director Susan Brogan.

Watch via our voice forum.

In his speech, the prime minister said that plans to return audiences to stadiums and conference and exhibition centres from 1 October were being reviewed, and that the culture secretary would provide more information. However, while it was specifically stated that weddings of up to 30 could continue, there was no mention of business events leaving planners confused over what they could and couldn’t do.

It has since been clarified  by the DCMS (on Monday) that events of up to 30 can still take place, but there has been no update as to when larger events, due to restart on 1 October, will now be allowed.

Green said: “ It’s frustrating for our industry that we have been provided with very little good news, guidance or support. We need clarity, we need lead time and we need a roadmap to get back on track. We also need a plan that is event industry specific, not for hospitality in general, that is written down, properly delivered and includes capacities and numbers. Other countries have been quite specific with capacities. We have never had that. It has always been very vague.”

Brogan added that it left agencies in a difficult situation over what to advise clients, who will be reluctant to confirm bookings without clearer guidance in place.

The Meetings Industry Association (mia) welcomed the news that business meetings and events holding up to 30 people can continue but said that the confusion had caused further damage to an industry already suffering from the “harrowing impact” of COVID-19.

“The lack of clarity provided to venues and event organisers respectively over the course of the last week does however hold significant implications which government must recognise. In the four days that have passed since the Prime Minister’s announcement, 76.5% of venues recently surveyed confirmed that this has led to direct event cancellations, with some cancelled events equating to values upwards of £50,000. This business reflects not just much-needed revenue, but a lifeline for many venues,” said Jane Longhurst, chief executive of the Meetings Industry Association.

“Through our UK Venue survey last month we already know that venues have averaged a £2,398,600 loss of business to date, which coupled with restrictions on operations and the generation of revenue has led to some 126,000 job losses since the pandemic began. If venues cannot open for business at larger capacities soon then they simply must be funded, before this £70bn economic driver is simply no more.”

Meanwhile, the Society of Incentive Travel Excellence Great Britain Chapter (SITE GB) has postponed its Annual Summit, planned as a hybrid event  in collaboration with micebook, due to the continued lack of clarity.

In a statement on social media, the association said: “The SITE GB Board are disappointed to announce the postponement of our Annual Summit, planned for 1 October. This follows the government announcement last week that the pilot scheme and restart date for conferences and events is being reviewed.

“We are committed to delivering a hybrid format as we think it’s important to get our members together in person as soon as possible to reconnect, boost confidence and show our clients it can be done. But we must do it responsibly and to a standard that you have come to expect. In order for this to happen, we need clarification and detailed government guidance.”