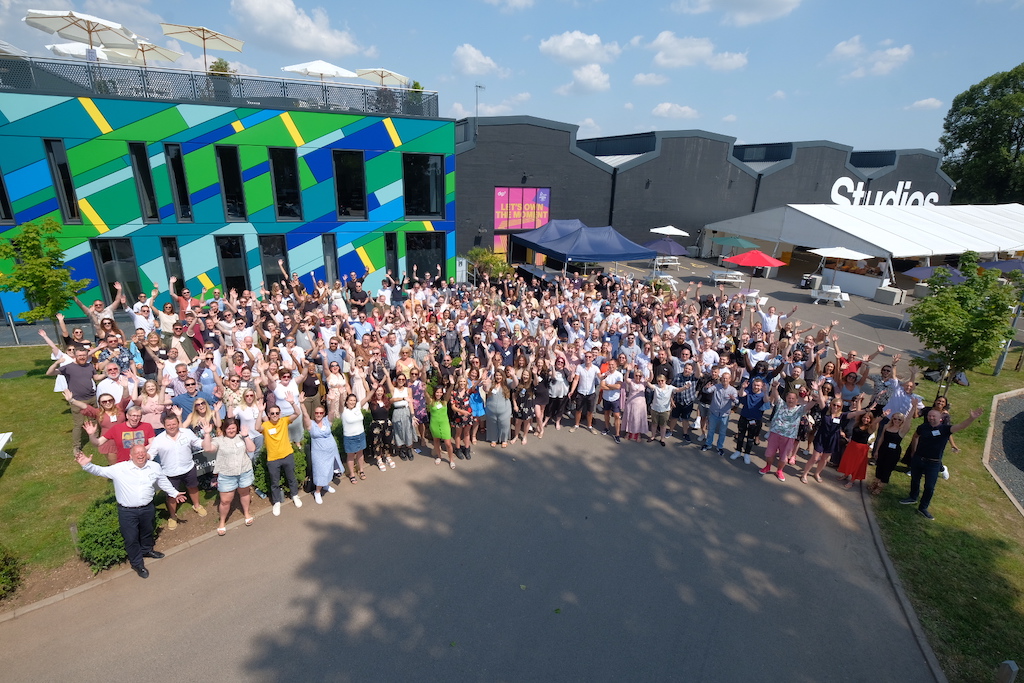 With a packed agenda focussed on re-charging and resetting for the future, the team celebrated all the positives from the last 16 months. Here, we share the highlights, and find out more from Project Manager Serena Panchal… 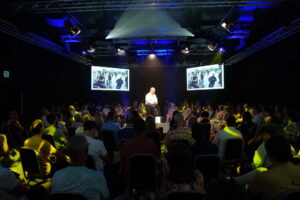 The hybrid event was held at held at the company’s studio complex in Worcestershire, with all 380 colleagues coming together – those who couldn’t be there in person joined virtually from across the UK, Germany, and North America. Over 80 team members had been employed during the pandemic, many of whom had not even been to the studios or met their colleagues in person.

Group CEO Dale Parmenter commented: “The year has been incredibly challenging for our industry. As a group we’re thrilled and excited that we can finally come together and acknowledge the work and commitment of our teams and celebrate coming through the crisis as one team, with over 1200 projects having been delivered.

“We have been able to help our clients to effectively communicate to both their internal and external audiences throughout the pandemic, and we were very keen to bring the team together and map the next chapter of Creative Communication and the return of live events as part of the comms mix.” 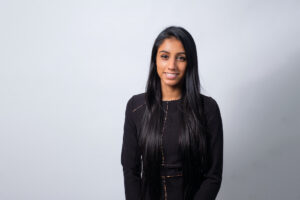 We caught up with Panchal the day prior to the conference to find out how it all came together. “Every year the company conference goes to somebody new, and it’s usually the latest project manager to join the team. I moved up from project co-ordinator in January, so it was my turn. When I joined the company I went straight into digital events, so this is my first live event and it’s been a great experience. It has also given me the opportunity to work closely with lots of different people across the business, which has been really great,” she said.

“We have had quite a few new starters since we have been in lockdown and working remotely, particularly those who are Manchester based. We also have a lot more people who are remote working and not based near any of our offices, and this is the first time they can come and experience being with the team in person. That is something we are very aware of and want to make sure the conference runs as best as it can because it’s not just a normal conference – there are so many people who haven’t experienced one before, or even been to the offices.”

Panchal said the biggest challenges were around the additional safety precautions that were put in place due to the pandemic. 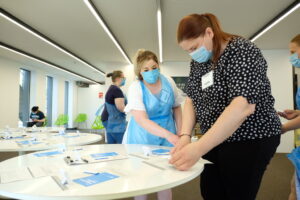 Following the easing of government guidelines, DRPG chose to uphold the highest of standards when it came to delegate safety and led by example in keeping the in-house testing centre open, ensuring every single team member was tested either the day before the event or on arrival before making their way through to the conference spaces, and retaining other safety protocols.

“Testing has probably been the biggest challenge. We looked at so many different plans and scenarios to work out the best way to test that many people because no-one has done it yet,” said Panchal.

“There were some people who were unsure about coming in person, but after I spoke to them and reassured them that everyone coming would be tested, it did put a lot of people’s minds at ease. They trust the testing system – it has worked for us this whole time while broadcasting events from the studios.”

Sanitiser was in place around the studios, masks were required in the testing centre until a negative result was given, and clear visors were offered on registration for anyone that might want to wear one for a bit of extra protection instead of a mask.

“By splitting everyone across two studios, we were also able to space the chairs out to give everyone a bit more space and make it feel more open,” she added. 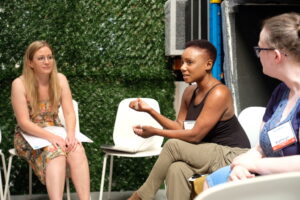 In addition to the main conference sessions, the group split up into 40 campfire sessions to reaffirm the company’s vision, purpose, and values, also to discuss issues around mental health and work-life balance as they plan to make their way back into the office and find their new ‘normal’. Other themes included volunteering opportunities through the company CSR Charter and sustainability within the workplace and live events.

The afternoon of open discussions and interactivity culminated with real-life superhero, Pride of Britain winner and keynote speaker, Jamie MacDonald who energised teams to remain determined and keep a positive mindset through stories of his own challenges to achieving business and personal goals.

The emphasis on acknowledging the team was solidified in the running of the event itself, as the senior leadership team took on the operational event delivery roles during the conference. This meant the wider group could fully relax and focus solely on the content and re-setting themselves for the year’s penultimate quarter.

The conference finished with a relaxed summer party and entertainment, everyone the chance to enjoy the £5m investment across their HQ facilities, such as the new creative area, team welfare and training centre complete with roof terrace, where they enjoyed food and drinks in the sunshine.

Parmenter concluded, “It’s been fantastic to finally get back together safely and provide the opportunity for new faces to meet the wider team, in the flesh, as we re-group, re-charge and re-set on our goal of becoming the agency of choice.”

Panchal said: “We had a really good time, and the ‘re-charge and re-set’ theme was perfect for everyone that has worked so hard through the past 16 months, and to be in person really combatted the virtual fatigue. It was amazing to work with our own venue too, it made my job so much easier by having facilities like our testing centre and kitchens being managed by colleagues, it made the whole process smooth. We also had lots of newbies at the event, so it was nice for them to experience the company in a face to face scenario.”

The event was well received by all. Olivia Crawford, Senior Project Manager, commented: “There’s lots of different measures they have put in place for us, from disinfectant fogger machines to masks in busy areas, but generally keeping a safe space and respecting everyone’s different preferences. It’s been amazing listening to the messages they’re telling us about re-charging and re-connecting with all our colleagues and taking away our key values that we hold.”

Project Manager Laura Pike added: “It’s been a great event and it’s been so nice to come into and put new faces to names and also the focus on our wellbeing, especially after Covid-19, and that’s been the strongest key message from today and I think that’s really important. This is my third week and I can see the culture already, everyone is so supportive, so approachable and good at their jobs, it’s inspiring to be around people that are so talented.”